Glastonbury and more for Hardwicke Circus... Jonny Foster updates us 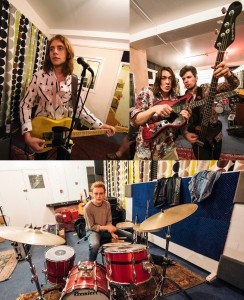 Carlisle is a city to be reckoned with. It may not be as big as Birmingham or Manchester or Newcastle, but what it lacks in size it makes up with it’s spirit. It seems to me that Carlisle has a big heart.

Carlisle runs in my blood. Like many reading this I was born in the City Maternity in Fusehill Street, only four streets away from where I currently reside on Howard Place. My paternal grandfather started work in Lings Painters and Decorators, and my dad at Cowens Sheldon on London Road. My maternal grandfather was the headwaiter at the Crown and Mitre when The Beatles came to town as the support act to Helen Shapiro and got kicked out of the cricket club annual dinner for refusing to adhere to the strict dress code. Luckily before being ejected they all signed a menu which is now in Hardwicke Circus HQ. A somewhat tenuous, but treasured link to rock royalty.

Cities help make bands. To name just a few think how Liverpool influenced the Mersey beat scene and more recently how Sheffield had an effect on the Arctic Monkeys. I have a firm bond with Carlisle and this is something I wish to continue with Hardwicke Circus. I have no intention of running off to London at the first opportunity. The band and I are convinced that we can make an impact on the national scene from our base, The Source Collective in Denton Holme.

Our London based management led by Dave and Milo Robinson, now regular visitors to our city, have also been seduced by Carlisle’s charms. In Dave’s long and illustrious career it is probably fair to say that he has never came across anywhere quite like it.

Recently completing a college tour of 86 gigs in just over a month has turned us into a tight knit unit. Since then our time in Carlisle has been put to good use. With the help of many business donors we have developed a recording studio at HCHQ. Thanks yet again to these companies for materials and furnishings.This has helped us to speed up the process of writing and recording our songs at a fraction of the normal recording cost. This studio is also available to other local bands which will help make Carlisle, in time, a focus for the northern music scene.

It doesn’t get any better than playing Glastonbury, the world’s biggest music festival with your best mates. The show was a massive buzz and the audience loved it. Playing such a large stage with an amazing sound system made anything seem possible. We even felt a little at home when we saw a Carlisle flag and banner among friends in the audience. To top it off, we were then invited to headline the Glastonbury crew party. Coldplay finished their set, Hardwicke began. Last band standing Glastonbury 2016.

About to go on Stage Glastonbury 2016

Our local festival Kendal Calling saw us fill the party tent and gain rave reviews. Coming up this summer we have more gigs and festivals. One weekend sees us play Leeds, Reading and Solfest - a jam packed few days.

In December we embark on our first tour supporting Alabama 3 at O2 Academies throughout the UK, and excitingly including the famous Shepherd’s Bush Empire. During this tour we will be taking time to play at Carlisle’s Old Fire Station on December 8th (put this in your diary for a staff night out)! Tickets on sale now from the Old Fire Station website.

Although things are going very well, we’re still focused on writing good music for the masses. Glastonbury was such a thrill but we have by no means made it. We invite you all on our journey and look forward to speaking to you at the next Ambassadors meeting.

We checked out the reviews that Jonny mentioned, and here they are. Click on the images to see the whole reviews of Kendal Calling, but wow - what great write ups for our very own Hardwicke Circus. Watch this space!

Carlisle Ambassadors November event - Shepherd's Inn 27th November 11am to 2.30pm - themed on Transport and Distribution ... and a little Xmas theme in there as well.

Carlisle: Cycling and the City